Excerpts of professor Leonard Liggio’s* remarks made** at the banquet between the Conference sessions(Lecture-speech delivered at the 1st International Conference-Workshop „Ethical Foundations of Economy”,Krakow Oct. 13, 03 ) An often overlooked influence on the American founding fathers, as they drafted and erafted the U.S.
Constitution, is Poland and its centuries of representative constitutionalism. I was a graduate student in Professor Oskar Halecki’s seminar. on the History of International Relations and Eastern Central European

Diplomatic History at Fordham University. Before becoming a professor, Halecki served as the secretary of the Polish delegation to the Versailles Conference in 1919, and then to the League of Nations. As America’s founding fathers took inspiration from Poland’s constitution and history as a republic, Halecki’s experience in international relatitions led me to write my M..A.. thesis on „The Austro-Polish Solution to the Polish Question, during the First World War.”

The Seven Years War (1756-1763) brought European events strongly to the eyes of the American colonists. As the war brought British interference with American exports through neutral ports, Americans observed the growth of government taxation and oppres- sion in other European countries. For example, foreign intervention in the meetings of the Polish diet were noted, as well as the election as Polish king, through Russian Empress Catherine the Great’s influence, of her lover – the former Polish envoy to St. Petersburg, Stanislas II Poniatowski (1764-95), nephew of the Czartoryski family.

The Americans followed the exploits of the Confederation of Bar (1768-72) when the gentry maintained a constitutional struggle against Russian influence in the Polish diet. Led by Joseph Pulaski, it included several people later noted in the American Revolution: the son of the leader, Casimir Pulaski, Tadeusz Kosciuszko, and Charles Lee, an English officer who brought his military tactics from the Russian Steppes to America in the Revolutionary War. The Confederation of Bar was entangled in a Russo-Turkish War. The war was a stalemate, but ended by the First Partition of Poland (1772), compensating Russia with part of Poland.

Edmund Burke, in the English parliament, not only defended the liberties of the British in North American colonies, but referred to the constitutional events in the Polish-Lithuanian Commonwealth as another struggle for liberty in the face of tyranny. The Polish Constitution of 1791 raised for English and American Liberals the question of illiberal democracy. Fareed Zakaria has written on the issue that democracy itself is only a valuable instrument, but it is not an end in itself. A constitution must create the framework for, and limit the powers of, the executive, legislature and judiciary. The government’s powers then are not absolute. Majorities cannot rule against minorities; majorities cannot vote what is wrong to make it right. Majorities can only act on a few and limited things. It is the natural law and natural rights which are paramount; and legislatures and executives can only act on certain matters. This is the basic thinking of Western Civilization. Where does it come from?

We can go back to Sophocles and the call to the higher law which is above the edicts of the rulers; the custom of family obligation precedes the orders of the city. The Stoics understood that every human being shares the same nature and the same dignity. Instead of the limitations of the „polis”, the Stoics proclaimed the universality of human nature in the World City, the „Cosmopolis”. Early Church Fathers developed the ideas of the Stoics and other schools making these ideas central to Christianity.

The Roman praetors took from all the concepts of the Mediterranean peoples the most efficient solutions to legal issues and created the Jus Gentium for commercial cases. The Law of the Peoples or Law of Nature for commercial transactions has been a foundation for Western legal systems for more than two thousand years; especially the Merchant Law.

Thomas Jefferson was well-informed about Polish constitutionalism through Filippo Mazzei, who had migrated to Virginia. When Jefferson went to Paris as American minister, the Italo-Virginian Mazzei was appointed by King Stanislas Poniatowski as Polish representative in Paris. From the Confederation of Bar (1768) until the Polish Constitution of 1791, Poland experienced a large output of constitutional writing. Some: Qfthis literature was widely discussed in France and came to the: attention of Thomas Jefferson in Paris. John Adams, who had been in Paris until Jefferson arrived, became American minister in London and was writing his three volume „Defense of the Constitutions of the United States” in which the Polish Republic was discussed. As the late American general Casimir Pulaski would have felt, the torch of liberty was passed from the momentarily extinguished Polish Republic to the new American Republic.

* Leonard P. Liggio, an American, is executive vice president of the Atlas Economic Research Foundation and Distinguished Senior Scholar at the Institute for Humane Studies. He is also a research professor at the George Mason University School of Law. In addition, he is currently President of the Mont Pelerin Society (composed of several hundred members, mostly distinguished scholars and economists from all over the world, including at least seven winners of the Nobel prize) and a trustee (and former president) of the Philadelphia Society. He serves on the editorial board of the American Journal of Jurisprudence.

** as reported in the winter 2003 issue of i”Highlights”, a quarterly bulletin of Atlas Economic Research Foundation. 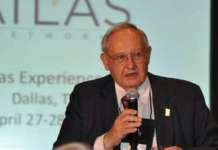